On the 4th of May, on the occasion of the 40th anniversary of the Freight Forwarders Association of Barcelona (ATEIA-OLTRA), Universal Global Logistics (UGL) received a distinction as one of the eleven founding partners of the association. The award was presented to Alfredo Matías, UGL Barcelona Branch Manager, during a ceremony that coincided with the 11th edition of the Freight Forwarder’s Day.

The event was attended by many members of the port community and representatives of shipping and freight forwarder companies in Barcelona. Jordi Trius, Managing Director Maritime Services Agency Network of Marmedsa Noatum Maritime, took part in the event as President of the Shipping Agents Association of Barcelona.

The ceremony also count on the presence of Josep Rull, Minister of Territory and Sustainability of the Government of Catalonia, who congratulate the association and highlighted the role of freight forwarders for the functioning of logistics. 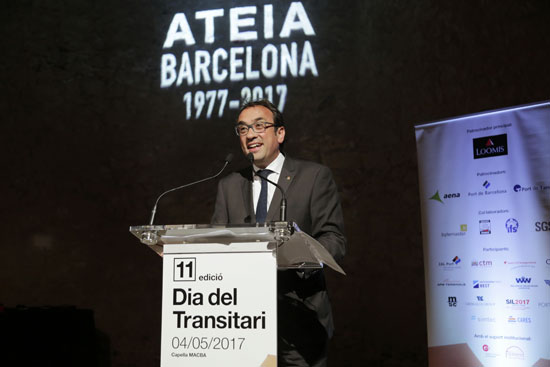 At left, Josep Rull, Minister of Territory and Sustainability of the Government of Catalonia; at right, Emilio Sanz and Jordi Trius, respectively, presidents of the Freight Forwarders and Ship Agents Associations of Barcelona.